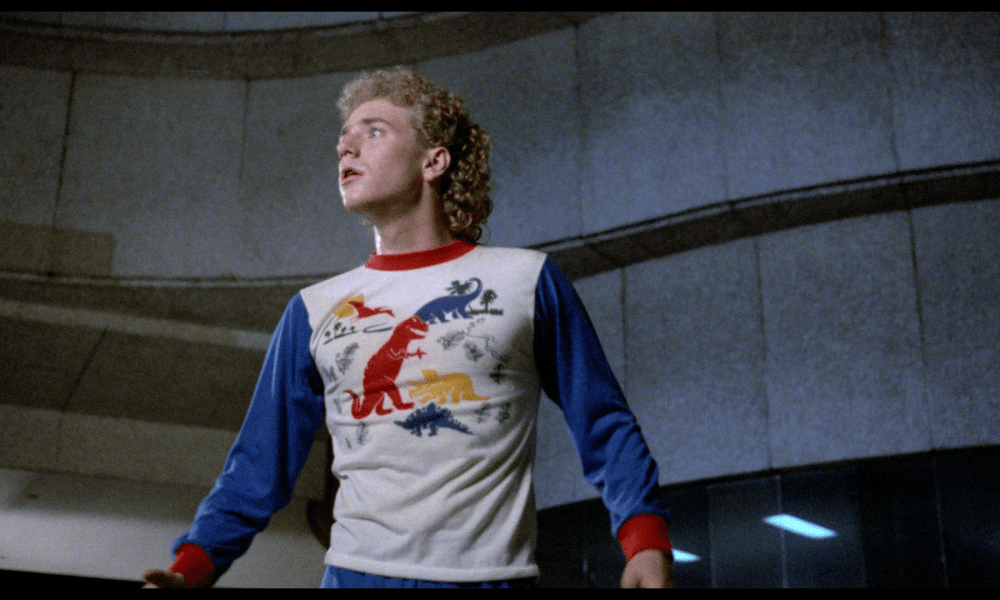 I make no pretense about my love for cheesy cinema. Some movies are just so bad that they wrap around into the realm of being good again. Sometimes this is because of absurd plots that progress in bizarre or insane ways. Other times, the films are so poorly acted that they border on comedy gold; you know the kind, those movies worthy of group watches where the jokes that arise make viewing experience. Well, for today’s double feature, both films make such odd choices that they are charmingly eccentric and worth a watch, especially with friends (We’re getting there folks, but stay safe – Shawn). That’s right, today’s films are Don’t Panic and Doom Asylum.

Both of these films are so filled with cliches from the genres they draw from that I liken them to pizza, in that even bad pizza is still kind of good (definitely wouldn’t agree there – Shawn). One is the old “demon- summoning-by-mistake movie,” and the other is a straight-up slasher. In each case, these films know the tropes to exploit and the beats to hit and they do so with flair.

Don’t Panic is about a group of friends who accidentally summon a demon, who then sets out to them pay for their mistake. On Michael’s 17th birthday, his friends sneak into Michael’s home after his birthday party to play with a Oujia board. Michael does not like the idea but, but Alpha-Friend Tony won’t take no for an answer. See, Tony has invited Alexandra along; the new girl Michael has a crush on. Using her presence, Tony goads Michael into playing along. Michael agrees, and Tony tries to summon “Virgil.

In the middle of their attempt, Michael’s mom catches them and kicks everybody out. The next day, Michael cuts class with Alexandra. They have a great day and have no idea anything is wrong. That night though, Michael has a terrible dream where someone is killing one of his friends. Upon waking, the dream proves real, and from here, Michael continues to have visions of his remaining friends being murdered, realizing he has to stop the killer, who is eventually revealed to be the entity from the seance, Virgil. The thing is, whenever Michael has visions, his eyes turn red, and he becomes blind to anything but the visions, which leads us to the problem of just who exactly Virgil is possessing to commit the murders.

Don’t Panic would be hopelessly generic in its story if it were not for some of its more absurd stylistic choices. For example, I mentioned the day Michael spends cutting class with Alexandra because it is an insanely long romantic montage for a horror film. About 20 minutes of the 90-minute run-time. The love story between Michael and Alexandra is a big part of this movie and it’s just bizarre how quickly these two “fall in love.” This is obviously done to ratchet up the tension for the film, putting graver stakes on Michael saving Alexandra, but it’s done in such a way that the whole subplot makes it feel like Don’t Panic is two movies mashed together.

Another charming eccentricity that is so odd that it actually made its way onto the film’s poster is a lengthy sequence during which Michael is trying to stop Virgil while wearing his pajamas. And to be clear, these are not the pajamas of a 17-year-old man. Michael runs around in the PJs of a small boy, complete with dinosaurs printed all over them. Already odd in itself, but what may be even stranger is the fact that no one else in the film seems to notice this. It’s the kind of detail a better movie would make a joke from, but for whatever reason here, everyone in this film acts as though it’s perfectly normal for an all but adult man to wear dinosaur PJs. There are more absurd touches to Don’t Panic; however, I’ll leave the rest for viewers to experience.

Doom Asylum is a bonkers horror-comedy slasher, unlike most movies I have ever seen. It starts with Mitch, an attorney, driving recklessly through the countryside with his girlfriend/client Judy. They have just won a large settlement, and the two plan to run away with each other and live in drug-addled luxury. Instead, they get into a horrible accident and end up taken to the nearby mental hospital. Judy dies. Mitch is believed dead, but as the medical examiners find during his autopsy, Mitch wakes up. Once he finds out about Judy’s death, he has a complete mental break and murders the examiners.

Years later, a group of kids chooses a spot near the abandoned remains of the asylum for a picnic (of course they do – Shawn). When they hear a punk band practicing inside the derelict building, the kids decide to go exploring, unaware that the horribly disfigured – and by this time completely nuts – Mitch is still living in the asylum. And to him, all these kids represent a fresh set of victims.

Doom Asylum is a blast because it is so weird. Mitch has a demented but fun sense of humor. Like Freddy Kruger, he rarely murders his victims without a pun and usually with the gleeful energy of a child at play. Then there are the kids. Oh, man. The two groups of kids are mostly at odds, except for the black kids. It makes absolutely no sense why a black girl in an absurdist punk rock band immediately falls for the black guy in the other group who is all about hip hop culture, other than they are both black.

Very outdated. A tad racist and simplistic, yes, but somehow still not the strangest couple in this movie. That distinction goes to Kiki and her boyfriend Mike, who constantly refers to Kiki as “Mommy,” and not in a kinky sexual way. Nope, this is done in a completely unnerving manner. There is a scene wherein Kiki exploits Mike by stating that if he does not do what she wants, “Mommy will be very angry.” And, of course, Mike does not want to make mommy angry. Yeah, it’s both gut-bustlingly hilarious and skin-crawling all at once. The gore in this film is fantastic, and the kills are original. Also, pay attention to the sexy nerdy girl who is a one-piece swimsuit the entire film because she is played by future star Kristen Davis. I always find it entertaining to see the horror movies that some big-name stars started in.

My final suggestion for this double feature is to have a viewing party to watch them. It makes the experience better, and these are the kind of movies that deserve some live audience heckling as you are watching. For streaming these, you’ll need a subscription to Shudder for Don’t Panic and Arrow Tv for Doom Asylum. That is the only place I know of to see Don’t Panic, but you can rent Doom Asylum from Apple TV.