We discuss the ups and downs of Fede Alvarez and David Blue Garcia’s new Texas Chainsaw Massacre from Netflix. Also, Classic Corner returns as a regular feature and we kick it off with 1960’s Eyes Without a Face. From there, it’s Image Comics’ Infidel, Vinegar Syndrome’s release of Beyond Dream’s Door, and Adam Ellis’ Dear David. 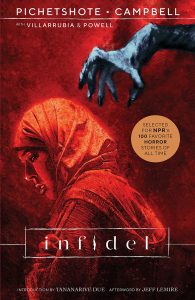 Recently, my friend Jesus gifted me a copy of Pornsak Pichetshote and Aaron Campbell’s Infidel trade paperback. I’d heard titterings about this book online; that it was a fantastic new horror comic, and a modern update on the haunted house paradigm. But despite flurries of excitement in my peripheral vision, Infidel somehow escaped my purview on the shelves of my beloved comic book shop.

I say most sincerely then, thank you, Jesus, for sending this book my way. Infidel is, simply put, stunning horror. It is modern, terrifying at times, and downright ugly at others. Ugly, despite the absolute majesty of the art and execution of the concept.

You can find this first volume pretty much anywhere comics are sold. Will there be others? I’m unsure; the first trade ends the story satisfactorily enough, but of course, with a success, there is always room for more. Plus, the thankfully vague explanations for the haunting the characters stumble upon in the back half of this volume are just begging to be fleshed out. There’s dark magick here, and something else you can’t quite put your finger on. Which makes everything all the more frightening.

When you look at Infidel, the first thing that strikes you is the art. It’s gorgeous and strange; beautiful even in its abject ugliness. It carries the story but remains abstract and non-committal. Make no mistake, this is not an easy feat, and everyone involved deserves a tip of the hat for the pacing, tone, and emotional resonance Infidel carries. 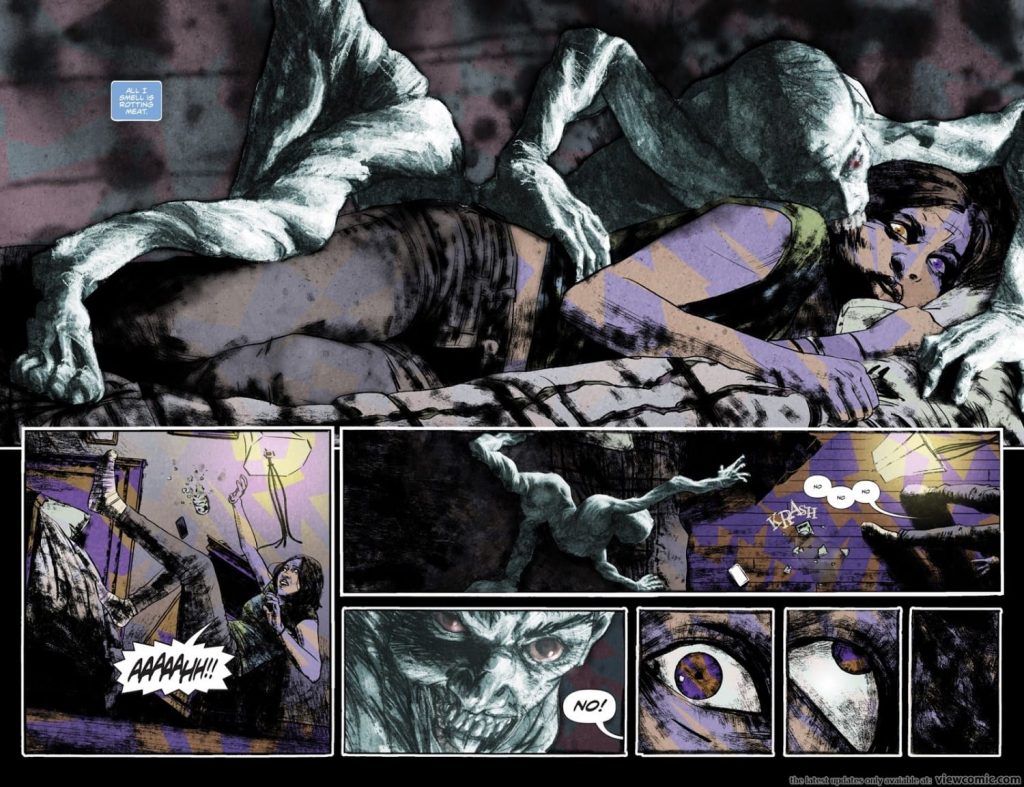 Look at that. Bone-chilling, right? Well, that’s just the beginning of the nightmare fuel in this book.

Infidel’s basic plot is this: two Muslim American women and their multi-cultural neighbors find themselves living in a building haunted by Xenophobic ghosts. It’s a great set-up, but the execution even transcends what you can say about it in an elevator pitch. Needless to say, the book landed a film deal after a mere two issues, and if reading this late at night, the dark pressing in against your lamp, doesn’t creep you right the hell out, well, you might want to consider signing up for a night in that haunted mansion.  Infidel is probably the creepiest book I’ve read since Scott Snyder and Jock’s Wytches (and just when the hell is that coming back?)

Infidel hits you in the horror nerve while whittling your defenses away with well-earned empathy for the characters. Bad shit happens in our world, but in Infidel, that’s only the beginning.